Agile and DevOps are two greatly overused terms. They denote a cultural shift in how companies manage the software product development lifecycle.

Both terms defy the definition and breed mythology. The current ‘Agile Vs DevOps’ trend may give an erroneous impression of a paradigm shift to the post-Agile world.

Essentially, Agile is a replacement for the Waterfall model in software development. And DevOps is an extension of Agile beyond development to operations. One process, two dimensions.

But is it worth merging Agile and DevOps? And how to have the best of both worlds?

Let’s zoom in and catch the devil in the details.

An attempt to standardize software development by analogy with manufacturing and construction industries failed big. Building software is nothing like constructing a house. Waterfall business value was dubious simply because:

Read also: Agile vs Waterfall Project Management: Which one is Suitable for Your Project?

To build a product of value

Agile Manifesto outlined the priorities and 12 principles of software development.

To develop faster and leaner

The approach has been a game-changer for software development. In the ‘plan – build – run’ chain of SDLC, Agile strengthened the ‘plan-build’ link: tightened the customer-developer communications, reduced the development time, addressed bottlenecks, and improved product quality.

Wait… but what about the post-release life?

There’s still a gap between ‘build’ and ‘run’. New features were shelved for months after the release. Business value only happens when the product is released – and deployed.

What’s more, Agile adoption created confusion, bottlenecks, and uncertainty in operations due to forever evolving requirements, scarce documentation (typical of Agile), and frequent software updates. Too serious a problem in a highly competitive market. For a product to excel, its timing, quality, and safety have to be perfect.

DevOps is ‘a set of practices intended to reduce the time between committing a change to a system and the change being placed into normal production while ensuring high quality’. It uses a number of automation techniques for development and deployment.

To deliver value to the end-user faster

Two major time-eaters in the SDLC are infrastructure setup (as software engineers have to develop the necessary web components) and acceptance testing between deployments. Infrastructure setup and subsequent adjustments in the traditional Ops may take 4 times as much time as with DevOps, just because Infrastructure as Code requires less time than manual adjustments after every iteration. Four times’ faster releases are no joke! 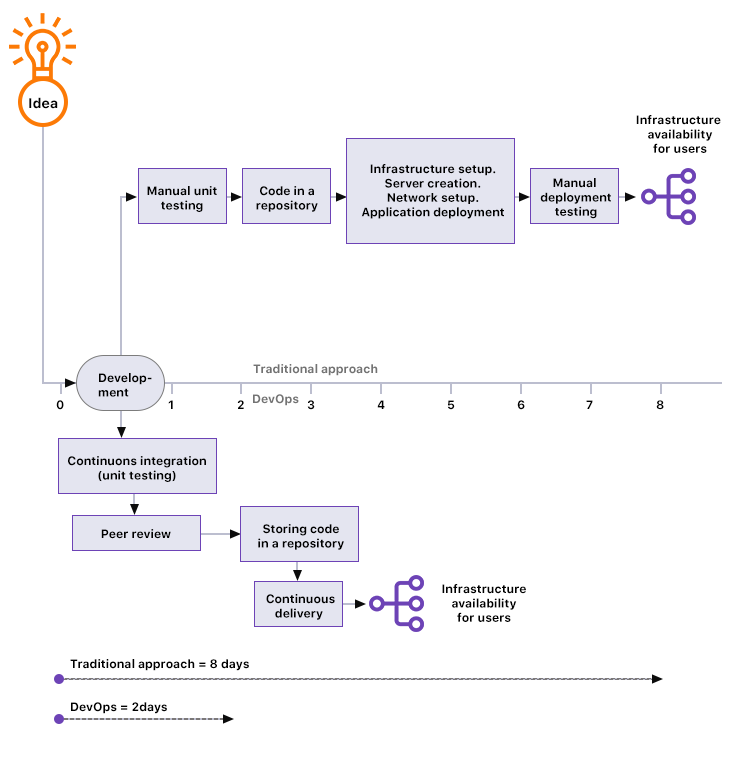 So DevOps (introduced by Patrick Debois for Agile 2008 Conference in Toronto) wasn’t meant to render Agile obsolete, but to put Agile principles to practice.

Because the technology is ripe

The timing was just right, too. DevOps may have appeared out of necessity, but also thanks to technological advancements. The principles outlined in Agile and Lean asked for tech enablement.

Virtualization and automation allowed defining infrastructure as a code. Switching from a lengthy manual setup to the infrastructure as code is cost-efficient and bridges the gap between Dev and Ops environments. Infrastructure is dynamic and inseparable from development, evolving together with the product’s updates.

Cloud hosting was advancing alongside. Cloud servers and load balancers use API to deploy the system in the cloud, which makes it scalable, globally accessible 24/7, safe, and hassle-free. The benefits of scale, redundancy, and backup are hard to resist.

Next came Docker that enabled the next-level virtualization compared to an ordinary VM. The Docker container limits resource consumption, it has its own address space and can be run on remote machines.

Kubernetes enables managing a large number of Docker containers. This allows building an application on a microservices architecture.

Most modern systems are supported on a daily basis throughout their lifetime (bug fixes, feature releases, system enhancements, scaling). While typical enterprise releases on average once every 9 months, top companies like Amazon deploy as often as 23K times per day! There’s no way you can keep up with the competition on cumbersome manual deployment, low code test coverages, the lack of tracking issues, or logging operability tasks.

With the globalization of online businesses and the unbundling of monolithic apps into complex systems on microservice architecture, the agility of both Dev and Ops is a way forward. DevOps organizations benefit from interoperability and reliability as the developer platform is always supported, backed up, and up to date.

DevOps with its cornerstones being infrastructure as code (IAC), continuous integration (CI), and continuous deployment (CD):

There’s little unanimity on how Agile and DevOps co-relate. Some see DevOps as a subset of Agile, others see DevOps as ‘agile done right’, yet others associate DevOps with automation. Let’s bust some common myths.

Myth: DevOps is Agile 2.0. DevOps (as a better version of Agile) addresses the siloed environments created by Agile teams.

Fact: DevOps does not replace Agile, nor is one better than the other. Agile is a development methodology and DevOps is a business philosophy. Though DevOps was born out of necessity for better communication between Dev and Ops and faster delivery of a product of excellence, the two hit the target differently. Agile teams effectively meet user needs, they tackle functional requirements in a very consistent manner. DevOps, on the other hand, focuses on the new feature last-mile delivery without interrupting user experience. DevOps caters to non-functional requirements, such as:

Myth 2: DevOps is Agile with tools

Fact: mastering tools is critical. But it doesn’t stop at that, nor is it enough. Changing the mindset to excellence being ‘everybody’s business’, ensuring consistent environments across teams, creating learning opportunities, improving management processes, getting rid of manual intervention (especially in testing and deployment), and understanding the real needs of the end user – all of those do not happen overnight. It’s work in progress, orchestrated and enhanced by tools.

Myth 3: Agile is about value. DevOps is about automation

Fact: while value stream automation is a top priority in DevOps, it’s not a goal in itself. And it should be approached wisely or you’ll be automating waste. DevOps is disciplined incremental elimination of bottlenecks. When servers are provisioned with a single command and the needed environments are deployed using preconfigured Docker containers, the software delivery pipeline becomes much more efficient, ensuring the process predictability and great user experience. Automation in development, testing, infrastructure, and deployment is a result of collaborative work and good design. Besides automation, DevOps prioritises metrics & reporting, audit & compliance, and broader integration.

All in all, DevOps works where Agile doesn’t and DevOps adds agility beyond development.

Difference between Agile and DevOps

It’s not entirely right to think that DevOps is a mere extension of Agile to Operations. Technically, Operations is the ‘last mile’ to the user, but since the DevOps process isn’t linear (think of the ‘eternity’ symbol of DevOps), the difference between Agile and DevOps models is much more complex. Let’s compare Agile and DevOps.

The differences between Agile and DevOps methodologies create an illusion of two separate independent processes, but in fact, they are two parts of a whole.

If I were to describe how DevOps is different from Agile to a five-year-old, I’d visualize a train. The wheels are Agile, the body – DevOps. The wheels go round in a 2-week plan-design-build-test cycle to release new functionality. The body then ensures it is delivered to the end-user smoothly and promptly, then fetches user feedback. Without DevOps, Agile would idle with a little forward movement or pull out all the stops with lots of ramp-up and ramp-down. Just because Agile is best at cyclic iterations and DevOps – at moving things forward and shuttling end-to-end.

How to make Agile and DevOps work together

Both DevOps and Agile offer a structure and framework that can speed software delivery and minimize risks. Instead of weighing the DevOps versus Agile methodology, the question, actually, is how to have the best of both worlds.

Capitalize on the benefits of Agile and DevOps

Agile has proven itself efficient with functional requirements of product development in the situation of uncertainty and forever evolving business needs. Still, non-functional requirements are more often than not swept under the carpet till later. As a result, the system becomes vulnerable and brittle. This is where DevOps excels.

Regardless of whether you have a DevOps engineer, DevOps team, sysadmin, support, automation engineer, CI/CD team, or other people responsible for the process, you’ve got to make them part of the Agile routine.

Strengthen the DevOps and Agile relationship by adopting automation throughout SDLC. Set up the DevOps pipeline: 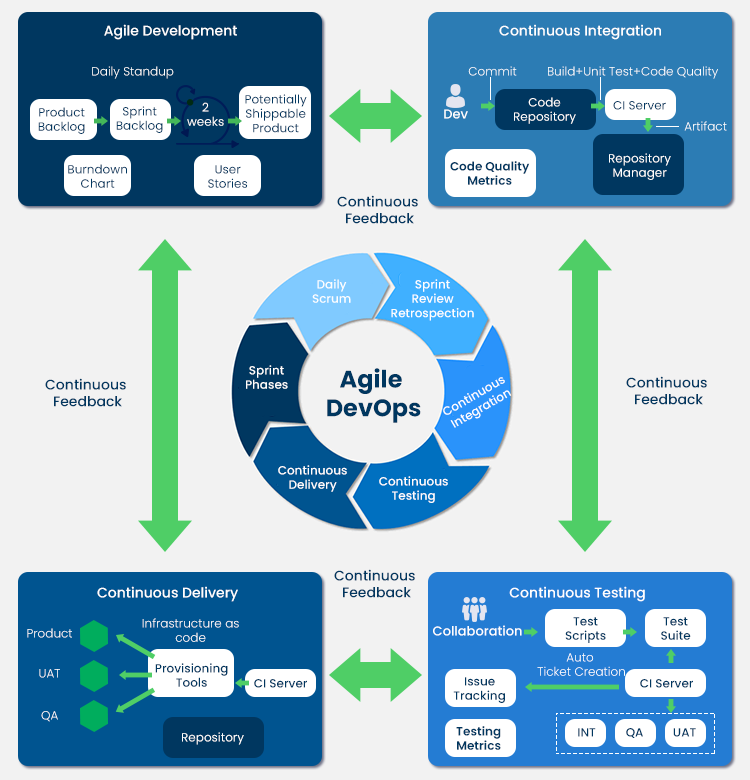 Rethink the roles of Devs and Ops

One shouldn’t mix DevOps as a general process with DevOps concrete functions, performed throughout the SDLC by a DevOps engineer or any other person responsible. In the end, it’s up to you to decide who performs them as long as the process is set up and operational. How do the roles break down in your organization?

Sprint planning is impossible without understanding the ratio of Dev and Ops load against the important milestones in the software development lifecycle.

‘DevOps’ as you can

Your organization’s unique characteristics and requirements largely determine the business process architecture. But regardless of stage or size, an organization is a living body in a forever changing environment. The only way forward is through system thinking, process improvement, and the culture of continuous learning.

Merging approaches can be painful. Luckily, both Agile and DevOps embrace self-improvement through feedback, flexibility, and agility.