Snapchat has taken the world by storm and is here to stay. It’s not just a funny selfie filter app. With its amazing machine learning technology, the app is in the lead of the mobile app race. And now that it is a known fact that the Snapchat concept is working, everyone wants to repeat its success story. But the question is how. How to develop an application similar to Snapchat and how much money you’ll have to spend on it, you can find out from this article.

The tale of Snapchat

I’m certain you are familiar with the famous Snapchat application but have you heard this fairytale of the app’s great success?

Once upon a time, in the year 2011 precisely, in the online space reigned three titans – Facebook, Instagram, and Twitter. But two brave men, Evan Spiegel and Bobby Murphy, didn’t get scared and launched the Snapchat app regardless.The risk of launching an app like the most popular apps out there was fairly big. They had to do something with the app that could help it stand out from the crowd. To stand next to the current rulers, they came up with an idea of self-destructing photos and videos. Basically, it means that any pictures or videos or messages you send are available just for a short term before they become inaccessible. The fact that posted content is ephemeral, creates the urgency and inspires users to visit the app frequently. 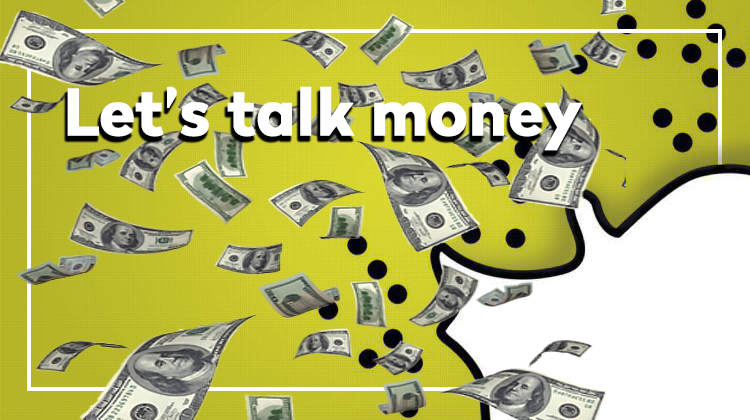 Yes, we get it, Snapchat is famous. But does it bring revenue? We can talk on and on about how great and amazing Snapchat is, but, there is no sense in digging deeper without knowing if it will become profitable. Don’t worry! Snapchat gets a lot of money through lots of different revenue models.

Now, let’s dive into the specifics of the process of Snapchat money making. Here are key points of Snapchat’s monetization model. 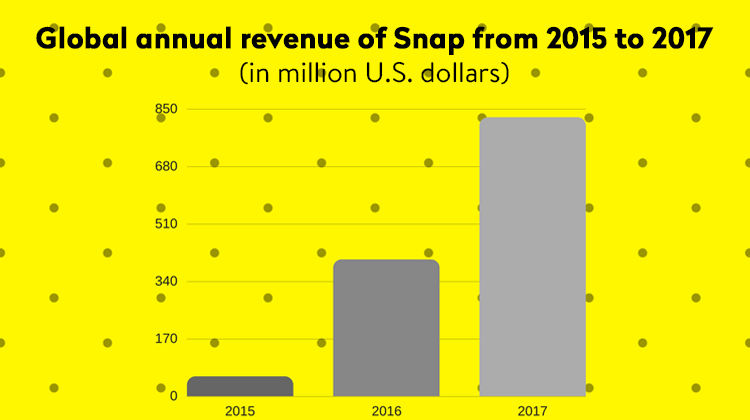 Here’s Snapchat’s business model canvas to help you get a general idea of how it works.

Now, let’s explore what Snapchat is made of and what are its most important features.

Snap is Snapchat’s key feature that made the app famous. Basically, it is a self-destructive photo or a video with filters, graphics and text captions added that users could exchange. If you are going to create a Snapchat-like app, think about some unique feature you can add so that your app becomes special.

A lens is usually a funny real-time effect you can add to your snap. You can do all of that thanks to face-tracking technology. This feature has appeared since Snapchat has obtained a startup named Looksery, which makes facial changes and empowers people change their look with different face-filters.

You have a choice of seven lenses every day, the number always stays the same, but the lenses themselves change every day. This feature brings a big amount of revenue to the face-tracking app owners. You can’t apply a lens to photos which have already been taken. You need to activate this feature before taking a picture.

To recreate this technology from scratch and for less money, use Mirror Reality SDK for iOS and Android developers. It lets developers build good quality mobile apps with face swapping.

Snapchat’s main priority is communication between users, and no conversation is complete today without some top-notch stickers. So, when making an app like Snapchat, take care of a fascinating sticker compilation.

Snapchat has 200 stickers in its disposal and earns money from this feature, by providing you with a custom solution. That means you can either come up with your own stickers or use the ready-made ones, which is much cheaper.

Not that long ago, Snapchat has implemented a new feature. People are able to send money to their friends and pay with a debit card through Snapchat. To be able to use the feature, a user has to be 18 years old. It is considered quite safe because the Snapchat team partnered with a company that provides mobile payments.

Snapchat provides users with its own unique messaging system. At first sight, it is a simple messenger, but there is one thing that distinguishes it from the others, and it is self-destructive text messages. How is that, you’ll ask? Well, after a message is sent and has been read, it disappears in a few seconds.

Another interesting feature you can use while messaging is sharing your location. For this feature to work, a user should type an address and it will be shown on a card that is linked to the Apple or Google Maps app.

Geofilters are filters that can be used only in specific places based on your geolocation. To make this work, you’ll need geocoding, that is a process that modifies coordinates into a location description. And then it can be placed on an image in some template. Note that geolocation is really popular today and consider using this feature in your app.

Geofilters also can be used to get a profit. McDonald’s offers its own geofilters that visitors can use while they are there. 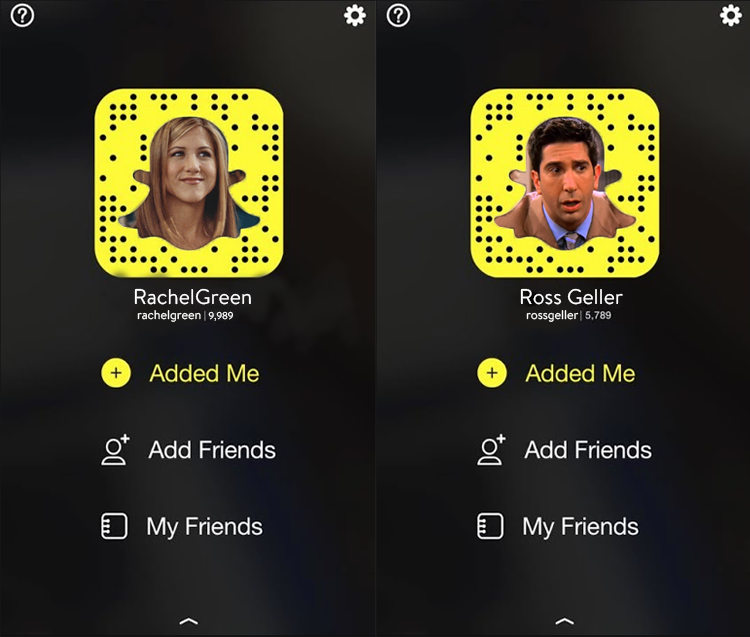 Finding/Adding friends is the most common feature of this kind of apps, but Snapchat succeeded in making the most simple and boring feature pretty unique and fascinating. Sure, you can still add friends by their names, but here are two more interesting ways of doing that:

Video and audio calling has appeared as a new feature since 2.0 version. Snapchat is always trying to meet users’ needs – hence you can talk to someone and send photos at the same time, or you can leave an audio message if the person is offline. This feature puts Snapchat on an equal footing with Facebook Messenger and Whatsapp.

A story is a snap that broadcasts 24 hours to all of your friends and then disappears. Users can review your story as much as they want, and also you get notified if someone has watched your story. Stories can be downloaded on your device. You can swipe left to see the next friend’s story when the Story is finished, other stories on the list start playing automatically. This way, you have continuous interaction with the app.

Discover is a place where you can find sponsored stories from famous companies: BuzzFeed, CNN, Mashable, and People.

Before diving into the process of an app creation, consider the following points:

For building an app like Snapchat, you can’t just hire a team of developers and wait for results. You need to be familiar with a typical app development process.

The number one step is to determine the best possible solution that fits your project expectations. Here we compare your budget, the desirable features, development time, and other app requirements.

Next step is to prepare the specifications and sign a contract which will formulate all the conditions of the cooperation for the creation of a Snapchat clone. It is a necessary measure to protect both sides of the mobile app development process.

The prototyping stage requires experts to present you with wireframes of each app screen and the detailed user flow. This step lets you discuss the details until giving ultimate approval.

Now it is time for UI/UX design. This part is quite significant because this is how your users get to see the app. Snapchat has clean, beautiful, intuitive, user-friendly interfaces. It means that your app has to be like that.

The coding part gets confusing for most clients, but there is nothing to be afraid of. This is exactly the moment when your application comes to life.

But it isn’t over. You need your app to perform flawlessly. And for that purpose, a team of QA engineers like the Avengers comes to the rescue. They execute a set of app testing activities in order to find and eliminate technical errors and ensure the high quality of the final product.

The release is the last but by no means the least step of the mobile app development process. It is the time when the app gets published and you get to enjoy the finished product. It is important to understand that the release of an app doesn’t mean that the work with it is finished. You need a team of developers to maintain it and update with a particular frequency.

So, here’s exactly how the famous Snapchat filters work.

The initial step is to detect a face. The program sees a photo as a set of data for the color value of each individual pixel. But how does it know which part of the image is a face? Well, the clue is looking for areas of contrast, between light and dark parts of the image. By repeatedly scanning through the image data calculating the difference between the grayscale pixel values underneath the white boxes and the black boxes, the program can detect faces.

Then it has to locate facial features. Based on the patterns, it does this with an ‘active shape model’ – a statistical model of a face shape that’s been trained by people manually marking the borders of facial features on hundreds of sample images. The algorithm takes an average face from that trained data and aligns it with the image from your phone’s camera, scaling it and rotating it to where it already knows your face is located. But it’s not a perfect fit and the model analyzes the pixel data around each of the points, looking for edges defined by brightness and darkness.

Then those points are used as coordinates to create a mesh – a 3D mask that can move, rotate, and scale along with your face as the video data comes in for every frame and once they’ve got that, they can do a lot with it. They can deform the mask to change your face shape, change your eye color, and accessories, and set animations to trigger when you open your mouth or move your eyebrows.

How much does it cost to make a Snapchat-like app

To find out how much it costs to make an app like Snapchat, you should consider the following list that consists of components which help to determine the app’s price and its general estimation.

As you already understood, Snapchat is an app that provides users with unique and fascinating experiences. It focuses on the urgency of content, hense users visit it frequently. When building a Snapchat clone, don’t just copy the original. Add something that no one else has, stand out from the crowd. After all, it is what Snapchat did. With this knowledge that we gave you in this article, you are ready to start the creation of your own version of Snapchat.

We hope you got inspired by the glorious Snapchat story. But remember you can always make it better!

How much does it cost to build an app like Snapchat with CodeTiburon?